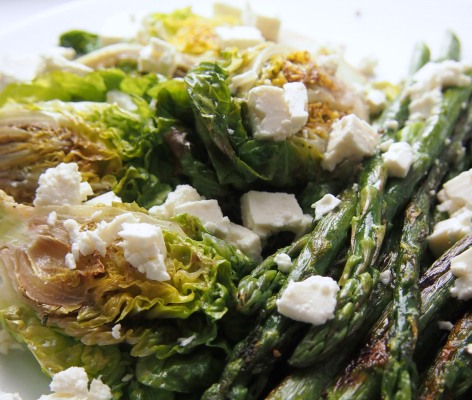 Probably the last asparagus of the season, as they are slowing disappearing from the supermarket shelves. So many recipes, so little time… Nevertheless,  I wish I had tried this one dish before. As easy as it seems, it is a very sophisticated plate of salad. And, these days, nothing seems as satisfying as the flavour of grilled asparagus, with a bit of olive oil and sprinkled liberally with salt… Happy moments in an ever so stressing last stretch before the summer break.

Bring a pan of salted water to a boil. Snap the woody ends off the asparagus and drop the spears into the boiling water. Blanch for a minute or two, until al dente. Remove from the fire and then drain. Let cool aside and pat with a tea towel until dry.

Meanwhile, cut the lettuces in half down the middle, leaving them joined at the root end. Add two tablespoons of olive oil, season generously and toss to coat, working the oil and seasoning into the lettuces a little with your hands.

Heat a ridged griddle pan or heavy-based frying pan until very hot. Add the lettuce halves cut-side down, cook for two minutes until golden brown and wilted on the base, then turn over and cook for a minute or two more. Remove from the pan and put on a serving dish.

Now add the asparagus to the frying pan and cook for about four minutes, turning occasionally, until tender and patched with brown. Put together with the lettuce.

Crumble the goat cheese and arrange over the grilled grennies. Sprinkle with a little more oil and serve at once. Serve while warm.