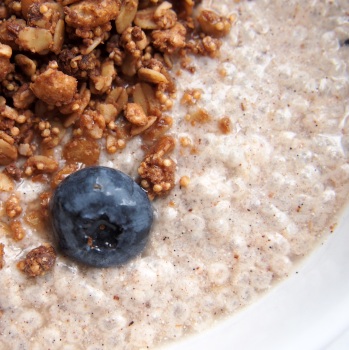 Mighty, gluten-free seeds, packed with omega-3, protein Blah-di-blah-di-blah-di-blah Eleven health benefits of chia seeds that are supported by science Blah-di-blah-di-blah-di-blah Great source of healthy omega-3 fats and fibre blah-di  and fortunately it’s an easy food to ad lalalalala. Indeed, I am trying to repurpose this blog into an healthy super foods outlet. The thing is that I actually like the gelatinous texture with some bite  and a nutty flavour. It make me feel full for a long time. It is super easy a pudding like dessert – all you need is milk or vegetal equivalent, add spices and you are ready to go. For extra healthy points, add another superfood.

Spiced chia pudding with blueberries and crunchy chocolate muesli (adapted from a recipe found in Food and Wine on-line magazine).

Refrigerate for at least 1 hour or overnight.

To serve, stir in the sea salt and top with fresh blueberries, granola and drizzle with maple syrup. Serve chilled.

It was love at first sight. And, timing couldn’t have been better. I was just looking for my annual super baking project when I bumped into this recipe.  It was so delicious, I will have to bake it again. And again… and again. Never mind the Modern Art Cakes – this the one I want I want for my birthday. Truth to be said, it is not particularly difficult dish.  But the flavours, oh!, the flavours….  It were layers upon layers of fresh, summery and nutty flavours, each mouthful different.

Apricot, walnut and lavender cake  (adapted from Yotam Ottolenghi’s column in The Guardian)

Heat the oven to 170C/335F/gas mark 3. Put the butter, oil, sugar and almonds in the bowl of a mixer and beat on a medium-high speed until light and fluffy. Add the eggs bit by bit, making sure each addition is well incorporated before beginning the next, then fold in the walnuts, flour, vanilla, lemon zest, a teaspoon of lavender flowers and an eighth of a teaspoon of salt.

Line the base and sides of a 23cm cake tin with greaseproof paper. Pour in the cake mix and use a palette knife to level it out. Arrange the apricot halves skin side down and slightly overlapping all over the top of the cake, taking them right to the edge.

Bake for 70-80 minutes – cover with foil if the top starts to brown too much; also, note that when you insert a skewer to test for doneness, it will come out a little sticky because of all the moisture in the apricots.

While the cake is baking, whisk together the icing sugar and lemon juice until you have a light, pourable icing (adjust the amount of sugar or juice slightly, to suit your tastes). As soon as the cake is cooked, remove from the oven and brush the icing all over the top. Sprinkle over the remaining lavender flowers and set aside to cool.

This was supposed to be a Tarta de Santiago [St James’ cake]. A bad kitchen day and a less than good execution converted it into a simple almond cake. But, not everything was lost… I found back a childhood flavor. Actually, something which resembled to what used to be my mother’s favorite cake. I can still remember the nanny doing it year after year for her birthday with super sweet ovos moles [soft eggs] filling. And on  the side, an ongoing polite fight between my mother and the nanny, where mother would ask the nanny for the recipe and the nanny would say she had promised never to give it away. The nanny eventually retired and all we got was a close enough version scribbled in a piece of paper. Or, maybe even the right recipe, but no one could bake it like her…

1.Preheat the oven to 180C. Coat a baking tray with baking spray (or butter and flour) (Ferran Adrià recommends a 30*50cm; I used a 30 cm round one

2. In a large bowl, beat the whole eggs and the sugar until you have a pale yellow foamy mixture

3. Add the the ground almond and the cinnamon to the egg mixture. Fold it slowly in the same direction with a wooden spoon, until you obtain a fluffy and airy mixture.

4. Pour the mixture in the tray (second fail of the day – if you want the St James cake, it must be about 1.5cm deep. My cake almost doubled it).

5. Put in the oven for about 20min, or until golden brown. Make sure it doesn’t stick to the sides of tray when you take it out of the tray.

6. Sprinkle icing sugar on top of it before serving.

Have been many times to Valencia, and never saw this combination. Normally, what you get if you ask for an ensalada valenciana is a mix of tomato, lettuce, onion and olives, dressed with some olive oil, vinegar and salt. In any case, Thomas Keller’s take is absolutely worthwhile trying… A lot of flavors that seem that won’t go together, but compliment each other to perfection.

Put everything in salad bowl, in a proportion that makes sense to your taste. Gently mix the vinaigrette. Serve.

Mix the vinegar and garlic puree.  Add the oil slowly, whisking until emulsified and smooth. Put in the fridge in a covered container until use.

Preheat the oven to 200°C/400°F/Gas mark 6. Rinse the peppers, and then place in a roasting tin while still slightly wet.

After 45min, the peppers will be blackened and soft. Leave until cool enough to handle. Keep any juices that have collected in the pan.

Peel the skin from the peppers and remove the seeds. Do this over a bowl to catch any juices.

Cut the pepper flesh into thin strips. Put the peppers and the reserved juices into a pan and simmer over a low heat for 5min. 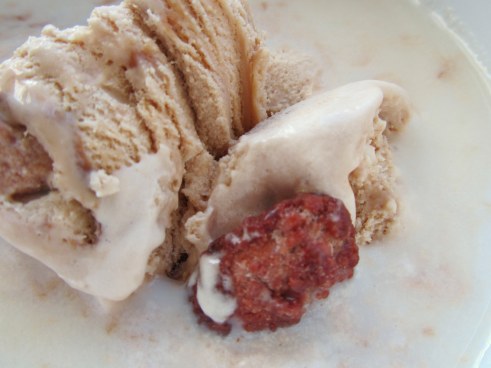 When I saw this dish on  Ferran Adrià’s The Family Meal, I decided to try it on a heart beat. All in all, it was an emotional decision driven by gluttony, which could have be a serious contestant to the Darwin Awards of cooks. As I was plating, I realized that M., the poor suffering tester, is allergic to almonds. Needless should be to add (once again) that  am lactose-intolerant. Would a dessert made of ressuspended almonds and milk-derivatives be a good idea given these combined food challenges? Really, no need to answer. It is already bad enough the question needs to be made. Fortunately, G. showed up for a coffee the day after, and volunteered to help with the full platted dish. He said it was good, and asked for more…

About the dish itself – making the almond soup is actually a bit more laborious than I expected. Filtering the almond suspension can ended in a bit of a mess. In case you wonder why I am cooking for 6: Adrià justifiably says this is the minimum you should do, as it takes some critical mass to get the almond soup right. And, really, go for the Marcona almonds if you can source them. Anything less than that, and you won’t taste its flavor. In the absence of nougat ice cream, I tried Caramelita. It is a good combination, but apparently a bit too sweet (probably true – Moevenpick ice creams tend to be on the sugary side of life).

Food intolerances apart, this is actually a lovely dish for a dinner party. You can do the soup in advance and then plate when you need it.  It is an elegant combination of flavours and textures, which won’t disappoint the hard core foodies.

Put the almonds in a food processor and roughly chop

Tip them into a large bowl, then add the water

Leave to soak for 12 hours in the fridge

Carefully strain through a fine meshed metal sieve, using the back of a ladle  to help the soup pass through the sieve.

Add the sugar and whisk until it dissolves

To serve, put a triangle of three caramelised almonds in the bottom of a bowl. Place a scoop of ice-cream in the centre of the triangle

Poor the almond soup around the ice-cream.

I found this pear and almond tart recipe on my way home, on tram 11. Someone left behind a Food & Travel magazine behind, and curiosity made me pick it  up to flip through. Two tram stops latter, I had already decided to try all recipes. As pears are at its prime around A.’s birthday, it has become her official birthday cake. Well, sort of.

For the almond cream

To make the pastry, put the flour, sugar, butter and salt in a food processor, and, using the pulse button, process until the butter is broken down (about 5-10 pulses).  Add 3 tablespoons of cold water, and pulse just until the dough forms coarse crumbs; add one more tablespoon of water if necessary, but do not do more than 10 pulses. Transfer the pastry to a sheet of backing parchment, form into a ball and flatten to a disk. Wrap in the paper and let stand for 30-60 minutes.

Roll out the pastry to the diameter of the baking tin (a tarte tatin or other round flame proof baking dish). Turn the tin upside down and on the rolled out pastry and press down and trace around the edge with a sharp knife.

Alternatively, just use pre made pastry. It might not be so good, but it does the trick.

Preheat the oven the 200oC. Prick the pastry all over, line with baking parchment, and fill with baking weights. Bake for 15min,   then remove the paper and weights (I used beans), and bake for 10-15min more, until just golden. Let the tart shell cool slightly before filling.

To make the almond cream, put the butter and sugar in a bowl and mix with the electric mixer, until fluffy and lemon coloured (it takes some time and patience. I start with melted butter). Beat in the eggs one at a time. Using a spatula, fold in the almonds and flour until well mixed.

Preheat the oven to 190oC. Spread the almond cream evenly in the tart shell. Peel and core the pears, and slice into 8-12 pieces, depending on the size of the fruit. Arrange the pear slices on top of the almond cream. Bake for about 20-30min, until puff and golden. Serve warm.