After the blondies, another dish out from Gordon Ramsay’s Ultimate Cookery Course.  Insort, three main ingredients to a delicious dish super easy to put together… All of a sudden, all these recipes with loads of cream, chorizo, stock seem a bit too baroque and convoluted.  Tweaking a bit the methods you can also end up with a quasi-healthy dish.  Meaning, using olive oil sparingly, skipping the butter and take out the fat from the chops. Well, sort of – or at least, this is want I want to believe because this combination is really outstanding.

First, prepare the peppers. Take a large frying pan and put enough olive oil to cover  its bottom. Heat until piping hot  and then add the onion and peppers. Season with salt and pepper, add the sugar and sauté over a high heat until soft and coloured.

Add the vinegar and let it bubble for a minute or two until it has reduced and the peppers are soft. Turn down the heat, add the tablespoon of extra virgin olive oil and cook for a further 2–3 minutes. Take the peppers out of the pan and set  aside to infuse.

Wipe the pan clean, ready to cook the pork.

Using a sharp knife, make cuts into the fat of the chops, about 5mm deep and at 3–4cm intervals, making sure you don’t cut into the meat. (This will stop the meat from curling up during cooking and will make it cook more evenly.) Season the chops on both sides,

Place the cleaned-out frying pan over high heat and put enough oil to cover the bottom. Let it heat until piping hot and add the chops, garlic and thyme and fry for 2–3 minutes until coloured. Turn and fry for a further 2–3 minutes on the other side.

Towards the end of cooking time, add 3 knobs of butter. Let it cook for a while, pressing the fat again the sides of the pan to render the fat. Squeeze the garlic out of its skin and place with the herbs on top of the chops.

Transfer the chops to a plate, and rest for 5–10 minutes, spooning over the basting butter now and again. Serve the chops on top of the peppers with the resting juices. 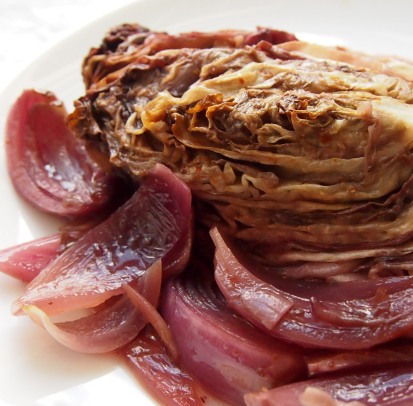 The book is called Easy, and indeed cooking cannot get much easier than this. Just chop, sprinkle and put it in the over. Forty-five minutes after you have the perfect dish to go with your roast…  Once again, happy friends going for seconds (and thirds).

Drizzle with the olive oil and vinegar. Season with salt and pepper to taste

Place in the oven and cook for 35-45min, until golden and caramelised. 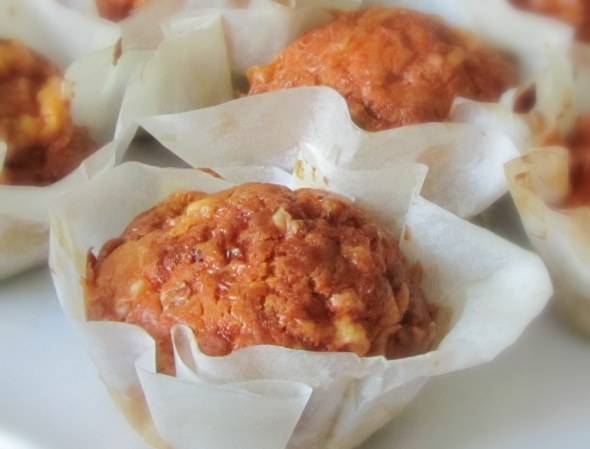 A totally unhealthy but delicious muffin… Definitely calories worthwhile ingesting. Better if eaten with wine or beer, and a little side salad.

The original recipe was found on Hugh Fearnley-Whittingstall‘s column in The Guardian. As you usual, I had to do a couple of tweaks. If you are novice to muffin baking, just follow his advice. You cannot go wrong…

Warm the oil over a medium heat and fry the bacon in it until just crisp. Lift the bacon from the pan with a slotted spoon and drain on kitchen paper. In the same fat, sauté the onion until just softened, about five minutes, then set aside to cool.

In a large bowl, whisk together the flour, baking powder, bicarbonate of soda and salt. In a jug, whisk the eggs, butter and buttermilk, stir them into the flour mixture with a spatula until just combined, then fold in the cooled bacon, onion, chives, if using, and two-thirds of the cheese until just evenly distributed.

Spoon or scoop the mixture into the muffin tin, sprinkle on the rest of the cheese, and bake for about 18 minutes, until the tops are golden and a toothpick inserted into the centre of a muffin comes out clean.

I first saw the onion confit and and goat cheese tartelettes on Mafalda Pinto Leite’s website (here, in Portuguese). It looked easy enough, but things went South when ready-made caramelized onion the recipe called for was nowhere to be find in Zurich. The only solution was to embark on a quest for the perfect red onion confit recipe. Finally, it was C’est moi qui l’ai fait who offered the perfect method for a luscious red onion confit.  And, since they had gone through all the trouble of doing their own jam from scratch, it was only fair to give it a go to their tartelette. It was a good call – the whole batch was gone in less than a sigh.

Preheat the stove to 210oC

Cut it in squares (4cm side), and place them on the baking tray.

Drop a teaspoon of onion confit at the center of each square (the corners should be free, so they can puff). On top of the confit, put the equivalent of a small teaspoon of cheese. Sprinkle with fresh thyme.

It is now ready to put on the stove, for about 8min, or until the pastry is golden. 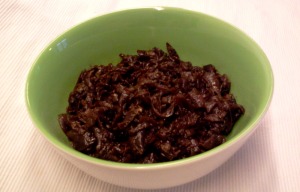 When I decided to try a dish who called for onion confit, I was far to imagine that I would end up to go on a quest for the perfect recipe.

First, I tried  the recipe that Joana Roque, a Portuguese food blogger and writer, had posted on her blog (here, in Portuguese). It looked all very serious, with loads of chefs and other food bloggers being quoted, with lots of flavors and texture,  but… either I had a bad culinary day and executed poorly the method, or this recipe is really not good at all. I ended up with something with the consistency of brick and tasting as sugary as sugary can be. The confit is now languishing in the fridge, with the vague hope that it might be used for something else.

A few googles after, I found C’est moi qui l’ai fait [I did it myself], a French blog that offered a recipe that looked much more reasonable. And indeed, it was delicious, its caloric content was a fraction of the first attempt and it posed no diabetes risk.

Met the butter in big saucepan. Add the sugar and the onions. Give a good toss and let simmer for about 30 min, stirring every now and again.

Add the balsamic vinegar and simmer for another 20min, until the vinegar is totally reduced and the onions look well preserved. Salt and pepper to taste.

Put in a glass container and reserve in the fridge 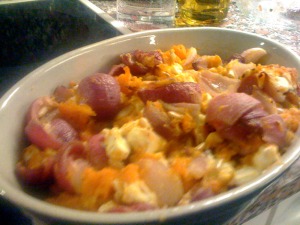 I have already mentioned it a few times: Tapas – Simple Flavours, Striking Combinations, by Carlos Horrillo and Patrick Morcas, is one of my favorite cookbooks. And, the  roasted sweet potatoes is one of my favorite dishes. It looks a bit laborious, but most of the roasting can be done in advance.

Put the sweet potatoes in roasting tray and drizzle generously with garlic oil until they are well coated. 2 pinches of salt and 3 pinches of pepper and then mix well. Put in the middle of the stove for about 1h, and mix every now and again to ensure they don’t burn.

Put the onion quarters in a small roasting tray and drizzle with garlic oil. Season with salt and pepper. Place them at the bottom of the stove and cook for 20min.

For the pine nuts, get a small frying pan and put it at low heat. Do not add oil. Drop in the pine nuts and fry gently stirring constantly until they are golden brown. Reserve.

When the onions and sweet potatoes are ready, place a large heavy based non sticky frying pan on a medium to high heat and put enough garlic oil to cover the bottom Drop in half the roasted sweet potatoes and fry until they start to break. Add half the roasted onions and give everything a good stir. Cook for 5min, stirring the whole time to avoid burning. Take it out from the pan and keep it hot. Repeat with the remaining roasted potatoes and onions.

When the second batch is almost ready, add the first batch to the pan and reduce the heat to low. Carefully stir in the feta cheese and the pine nuts and continue cooking until the feta is almost melting. Serve straight away.