Veni, vidi, vici: saw it on the Guardian on saturday, bought the ingredients on sunday and served it for Easter brunch on Monday. It was a spot on dish,  very much in the spirit of the season. In case you wonder, it is an Yotam Ottolengi’s take on an Italian dish with lots of modifications to adapt it to what was left on the supermarket. I was getting a bit apprehensive as I kept replacing ingredients by similar thing, but, it all worked very well together… It was a process to do it, but it is a lovely dish, worthwhile the calories and the effort.

Torta pasqualina (adapted from Yotam Ottolengi’s column in The Guardian.)

Put a large sauté pan for which you have a lid on a medium-high heat. Add the oil and onion, and cook for 10 minutes, stirring from time to time, until the onion is soft and starting to colour. Add the chard stalks and celery, cover and cook for five minutes. Stir in the chard leaves and spinach. Cook for five minutes more, until the leaves have wilted and the stalks and celery have softened. Remove from the heat and set aside to cool a little.

Line a colander with a clean tea towel or muslin and pour in the contents of the pan. Draw the sides of the towel around the filling and squeeze out the juice: you want the mixture to be as dry as possible. Transfer the contents of the towel to a bowl and add the herbs, spices, cheeses, three eggs, half a teaspoon of salt and a good grind of pepper. Mix well and set aside.

In case you don’t have a prepared pastry, roll half of it  out pastry on a lightly floured work surface into a 30cm square that’s 2.5mm thick. Transfer to a 20cm-wide spring-form cake tin with 7cm high sides. Press the pastry into the edges of the tin and trim off most of the overhang. Roll the remaining pastry into a 25cm square lid and set aside.

Tip the cheese and greens mixture into the cake tin and use a spoon to create five egg-sized holes. Break an egg into each hole, then lay the lid on top. Trim the edges, then pinch the lid and base together to make sure it’s secure.

Whisk the remaining egg, brush it over the lid, then prick a few times with a fork. Bake for 45 minutes, until cooked and golden brown. Leave to cool for half an hour, and serve warm or at room temperature.

Once I got the empanada de atun [savoury tuna parcels] properly tested and under control, I decided to expand to other combinations. Not knowing where to start, I turned to Carlos Horrillo and Patrick Morcas, whom seemed to favor  spinach, cream cheese and spinach. If it is good enough for Patrick and Carlos, it is also good enough for me…. I am actually quite fond of spinach, which helped a bit my decision. Of course, living in Switzerland, the Cheddar in the original recipe had to be replaced by Emmentaler. No one noticed seemed to complain – if anything it conformed better to the taste of hardened expats living in Switzerland for longer than they want to admit. All in all, a great dish to serve when the occasion requires food easy to eat or informal gatherings. For bonus, it is vegetarian and all the greenies make it look a bit more healthy than its tuna fish counterpart. Eat warm or cold, with a beer or a glass of red wine.

1. Coat the bottom of a heavy bottom non sticky pan with olive oil and put it on high heat, until the olive oil is smoking hot.

2. Drop the the spinach leaves inside, season whit salt and turn the leaves until they start to wilt.

3. Transfer the leaves to  sieve lined with kitchen paper, so it absorbs the bitter liquids.

4. Allow to cool, and put them in a large mixing bowl.

5. Add both cheeses to the spinach and mix everything together until it is homogenous.

6. Allow to cool overnight in the fridge

8. Line the bottom and walls of the rectangular baking tray previously buttered. Pinch it with a fork and fold in the e spinach and cheese mixture.

9. Put the second sheet of puff pastry on top, and close the edges trimming the excess pastry. Seal with the beaten egg. You can brush the whole surface to look shiny.

10. Leave in the stove for about 20m (or according to the  instructions), until the pastry is done.

Pizza Bianca with Potato and Anchovies

You don’t like tomato sauce on your pizza? Don’t worry, we have  have something for you: a pizza bianca, courtesy of Gary Mehigan and Masterchef Australia  This elegant combination of flavours and textures is so good, you  will have you wish you had made two pizzas. The Classic Pizza Margherita  is good, but this one is something else…

Pizza Bianca with Potato and Anchovies

Step 2: In a small bowl add garlic, 1 sprig of rosemary, 2 tablespoons of oil and a pinch of salt. Brush the dough with the oil.

Step 3: Combine cheeses and scatter over dough, leaving a 1cm border around the edge. Strip leaves from remaining rosemary and sprinkle over dough.

Step 4: Lay the potato slices evenly over the dough. Brush with oil and sprinkle with sea salt flakes.

Step 5: Slide pizza onto hot terracotta tile and bake for 5-6 minutes or until golden and crisp. Remove pizza from oven. Brush the crust with olive oil.

Step 6: Mix rocket with remaining olive oil and a pinch of salt in a bowl. Scatter mozzarella, anchovies, and rocket over pizza. Season with freshly ground black pepper and serve.

It is just one these salads perfect for Summer. I keep doing it over and over again, and no one seems to be tired of it. Although I am pretty sure this is a Gordon Ramsay dish, I forgot where I found it. But, in any case, if you want to be very precise, this actually is a variation of Gordon’s original recipe, which called for rucola. Mr Caramelised isn’t so fussed about it, so to keep domestic harmony I promptly replaced it with fresh spinach leaves. In all honesty, I didn’t have much problems to let the rucola go…

Spread the spinach in a large flat plate. In top of it sprinkle the orange and the trout. Season with olive oil balsamic vinegar, salt and pepper.

I found this dish by accident in Leite’s Culinaria. And it was just what I was looking for: asparagus are in season, a party was on the planning and if not edible, at least it was decorative. Truth to be said,it was a pretty good idea. It even passed the 11 year old test (minus asparagus).

2. Bring a pot of water to a boil. Have a bowl of ice water ready. Plunge the spears into the water for just a moment to blanch it, then remove it and toss it into the ice water. Do the same with the spinach, if using.

3. Meanwhile, brush a 23cm square tart pan or a 36cm rectangular tart pan with a little melted butter and line it with a sheet of phyllo pastry, pressing the phyllo against the side of the pan and allowing the excess to hang over the edge of the pan. Brush the top of this sheet with more butter and top it with another sheet of phyllo. Repeat until all the phyllo is used. Trim the edges of the phyllo flush with the top of the tart pan. (Phyllo can me a nightmare to work with, and I was in a hurry. Just got some regular puff pastry from the supermarket, buttered the tart tray and put the sheet in).

4. Drain the asparagus and the spinach, if using, and pat them completely dry.

If using spinach: Arrange a layer of spinach on the phyllo. Sprinkle lightly with salt and pepper. Add the Gruyere, a second layer of spinach, and season again. Beat the eggs, cream, and nutmeg in a bowl, then pour the mixture over the tart. Arrange the spears in a row on the tart. Brush the exposed pastry edges with a little butter. Cut a piece of parchment or foil that covers the inside of the asparagus tart but leaves the phyllo edge uncovered.

If not using spinach: Sprinkle the Gruyere over the phyllo. Beat the eggs, cream, and nutmeg in a pitcher or bowl, then pour the mixture over the tart. Arrange the spears in a row on the tart. Sprinkle lightly with salt and pepper. Brush the exposed pastry edges with a little butter. Cut a piece of parchment or foil that covers the inside of the asparagus tart but leaves the phyllo edge uncovered.

6. Bake the asparagus tart, uncovered, for 15 minutes. Cover the center but not the edge of the pastry with the parchment or foil and continue to bake until the center of the tart is just set, 15 to 20 minutes more. Let the asparagus tart rest a few minutes before slicing. (I was not very precise with the paper foil, and the edges got slightly burn). 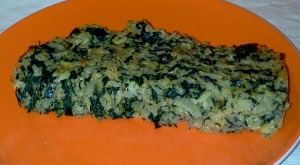 While looking for a recipe to use up spinach, I found by chance an old rticle about rice by Fiona Becket. The recipe has proved to be ageless, and delicious. The quantities of herbs and spices had to be adjusted to current times – pinches are now teaspoons.

Pre-heat the oven to 200C/400F/gas mark 6. Wash the spinach several times in a sink full of cold water. Remove the stalks and imperfections from the spinach. Place a large pan of water to boil and plunge in the spinach. Quickly remove the spinach, cool in iced water and drain thoroughly. Rinse the pan, refill with water and return to the cooker to boil. Form the spinach into balls, squeezing out any excess water, then chop finely. Tip the rice into the boiling water and cook for 10-12 minutes. Drain the rice and mix with the spinach.

Peel, finely chop, and fry the onions in the oil and butter until pale and softened, then add to the rice and spinach. Pick and chop the herbs, peel and finely chop the garlic, grate in about 4 tablespoons of Parmesan, add in the eggs, sea salt and several grinds of pepper. Mix all this together, then smooth into a dish or a tin lined with liberally-buttered silicon paper. Bake the cake in the oven for 25-30 minutes until golden 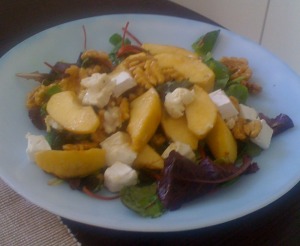 T. brought this  warm apples, nuts, sage, goat cheese and autumn leaves salad last time she came home for dinner. “Did you know Mafalda Pinto Leite?”, she asked, while she took over the kitchen and put the salad together. “Mafalda who?” I answered. Clearly,  I was missing out on something.  The recipe is from the book Cozinha Para Quem Não Tem Tempo (in a very liberal translation from the Portuguese, Cooking for Those Who Have No Time)

Put the butter, sage, vinegar and sugar in a frying pan (low heat). When the butter has melted, add the nuts and the apples and. Let cook for a few minutes or until the fruit is tender.

Make a bed of leafs in the dishes, and place the apples and the nuts on top. Reserve the juice that was left on the pan, and poor it over the nuts and apples. Finish with the sliced goat cheese.

Total time of cooking: 8 minutes-ish. Looking for the right ingredients in the cupboard: one eternity. 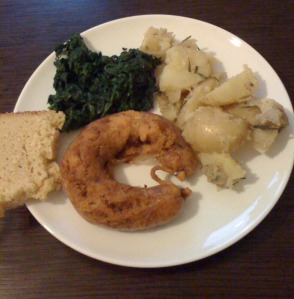