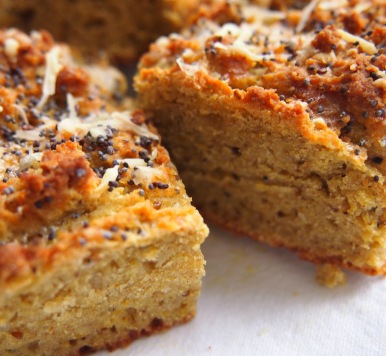 Maybe not the real soda bread, but still a very good version it. Actually, perfect to eat with a bowl of soup or with some salad.

Put the buckwheat and potato flours into a bowl and then rub in the butter. Add the baking powder, mustard powder and cheddar and toss through well.

Beat the eggs, yoghurt and milk together , then pour the mix on the dry ingredients and stir well to a soft dough. Line a baking tray with nonstick paper and spoon the mixture on as one big lump in the middle. Dust the top with buckwheat flour then pat it into a rectangle about 3cm high.

Cover the top with more grated cheese and poppy seeds, cut with a knife into 8-12 pieces, then bake at 220C/200C fan/425F/gas mark 7 for about 20 minutes until the cheese on top begins to brown. Remove from the tray and paper and leave to cool on a wire rack before serving.

Tomato and bread + summer = gazpacho. Nothing much to add to that, really. This was my first attempt this this year, and by to look of the weather forecast, probably the last. On this special occasion, I tried Ferran Adrià’s recipe, minus his secrete ingredient – mayonnaise. Don’t take me wrong – I believe him: it will probably make gazpacho much creamier, but, hélas, I still haven’t recovered from a bad mayonnaise I had more than a decade ago.
Gazpacho (adapted from Ferran Adrià’s The Family Meal)
Ingredients

Peel and cut the vegetables into large chunks and put them into a large bowl.  Add the tomatoes into large wedges and put in a bowl with the onions, cucumbers, and bell peppers. Add the bread, torn into pieces, then pour over the water. Process everything together using a hand-held blender, about 5 min until is well combined. Add the olive oil, sherry vinegar, salt and pepper and blend the soup until smooth and creamy. Chill in the fridge before serving (at least 2 hours). Serve the gazpacho with a plus an extra drizzle of olive oil. If you want, you can add cured ham, finely chopped egg, tuna, croutons, chopped pepper….. 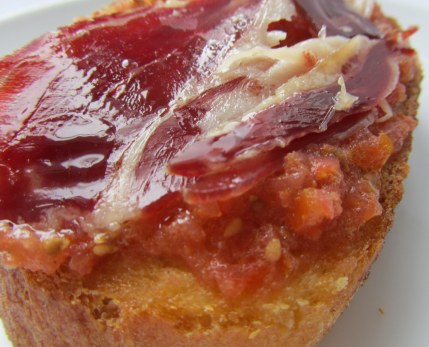 Fly-in-fly-out to Barcelona… A little less than 11 hours in town, which allowed to fit in enough time to do my thing, touch the Mediterranean and  buy proper ham at the airport free shop. And, by proper ham, I mean jamón ibérico de bellota [acorn Iberian ham], the dark red meat marbled with veins of fat which only the free range black Iberian pigs who feast on acorns can have. It is only the finest of cured hams and is considered one of the best delicacies in the world. Well, let’s make it clear –  it actually is. I have seen otherwise serious gown up almost shed a tear when they tasted. As M. eloquently put it “the kind of thing that makes worthwhile years of studying just to be able to afford it”. And, if I may add, instrumental to cope with endless hours of corporate drama.

In any case, once the precious ham was acquired, carefully transported into Switzerland and put to rest in the fridge, I still had to figure out how to serve it. It was not just a question of dropping it in a hot plate… This ham deserved the best ingredient to compliment its nutty rich flavor and bring the best out of  it. Since I had just been in Barcelona, it seemed totally logical to serve it with tomato bread, a combination of flavors made in heaven, known in Catalonia as pa amb tomàquet. It is said to be the most popular dish of their cuisine, and   you may find different versions and lines of thought. Toasted or fresh bread? Garlic, or no garlic? Rub the tomato or use a pre-made mixture? Grate the tomato or puree it? I just avoided all the metaphysical question by resorting to my ex-Spanish Mother-in-Law strong recommendations.

1. Grate the tomatoes into a bowl.

1. Toast the bread for a few minutes, until is warm and slightly crusty

2. Rub with the half garlic.

6. Put the ham slices on top 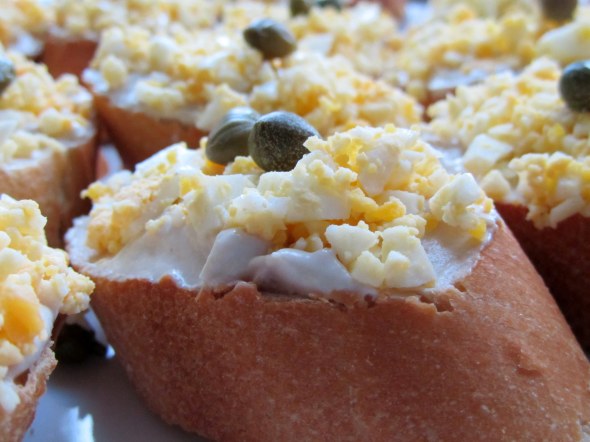 In a literal manner, tapa means a cover or lid in Spanish. But, if you are talking about food, a tapa refers to a range of fine appetizers and nibbles that are served in bars and pubs to accompany a glass of wine or beer. Over the years, tapas have evolved into a completely new concept, being now a synonym  of miniature dishes – sometimes very sophisticated – which are put together to form a meal. In any case, tapas, or its closely related pintxos and raciones, are the center of informal meals and allow you to focus on chatting and socializing rather than scoffing a full blown dinner.

Even risking sounding a bit pedantic, the dish I am doing today is a pintxo. Traditionally, this combination with anchovies is ubiquitous in the Basque Country. And, you simply  are not not served tapas in the Basque Country. Up the there, the pieces of bread with something on top are called pintxos. Incidentally, unlike other parts of the country, you also have to pay for them. In case you wonder, about.com does a excellent job on explaining with great detail and accuracy what is one or the other, and the difference between them.

As of late, I have been kind of missing this sort of flavors from home… A poker night  presented itself like the perfect opportunity to give it a go. After googling a bit, I ended up finding this Spanish blogger from Bilbao, whom had a recipe that looked very much like the pintxos de anchoa you  can find all over the Basque Country.

Put the cheesed and the anchovies (plus its olive oil). Mix well with a blender until you obtain a homogenous mix. Reserve.

Cut the bread crust out, and cut each slice in half so you can obtain 2 rectangles. Fry in a generous quantity of olive oil. Be careful to not let the olive oil overheat to avoid the bread to burn. I was on a hurry this day, and simply toasted the bread until it was crunchy. This version is also less caloric.

Spread a generous quantity of anchovy mix so you obtain a thick layer on top of the bread. Cover with the egg and put a couple of cappers on top of it. 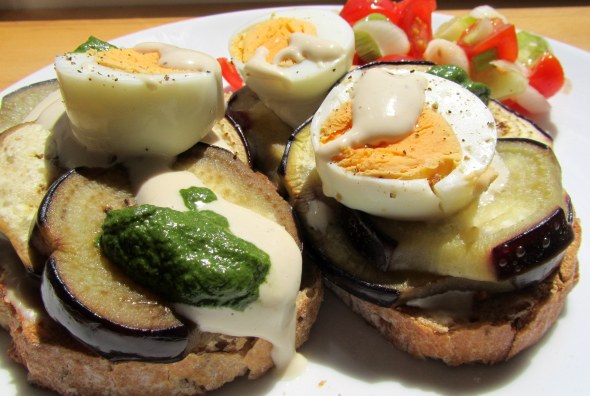 An Israeli chef gives his interpretation of an Iraqi dish, topped with an Yemenite green chilli sauce. And, a pretty damn good it was, just ideal for this sort of weather…. The recipe was brought to the Guardian (here), by the hand of Yotam Ottonleghi. You know the drill: kilometric list of ingredients and several elements to put together at the end. But, it is worthwhile the effort – the combination of flavors and textures is delicate and at the same time exciting. Each one has its place and none is over-powering. It can be cooked in large batches and stored in the fridge to be eaten ad hoc.

For the tahini sauce

Using a vegetable peeler, peel off strips of aubergine skin from top to bottom, so they end up like a zebra, with alternating black-and-white stripes. Cut both aubergines widthways into 2.5cm-thick slices.

Heat the sunflower oil in a wide pan. Carefully – the oil spits – fry the aubergine in batches until nice and dark, turning once, for six to eight minutes; add oil if needed as you cook the batches. When done, the aubergine should be completely tender in the centre. Remove from the pan, leave to drain on kitchen paper, then sprinkle with salt.

To make the zhoug, put all the ingredients in a food processor and blitz to a smooth paste. For the tahini sauce, put the tahini paste, water, lemon juice, garlic and a pinch of salt in a bowl. Mix well, and add a little more water, if needed, so its consistency is slightly runnier than honey. Make the salad by mixing the tomato, cucumber, spring onion, parsley, lemon juice and olive oil. Add salt and pepper to taste.

To serve, place a slice of bread on each plate. Spoon a tablespoon of tahini sauce over each, then arrange overlapping slices of aubergine on top. Drizzle over some more tahini, without completely covering the aubergines. Season each egg slice, and lay on top of the aubergine. Drizzle more tahini on top and spoon over as much zhoug as you like – be careful, it’s hot! Serve the salad on the side; spoon a little on top of each sabih, too, if you like. Store any leftover zhoug in a sealed container in the fridge – it will keep for a week at least.