It is also a good make-ahead dish. Just prepare the rhubarb and keep it on the fridge  until you need it.

Put the rhubarb in a pan with the orange zest and juice, honey and 2 tbsp of water. Stir over a low heat until the honey dissolves.

Cover the pan and stew the rhubarb very gently for about 8 minutes, until it softens. Add a little water if it starts to look dry. Switch off the heat and leave to cool completely. (You can, of course, prepare the rhubarb a day ahead and keep it chilled overnight.)

Put the rhubarb mixture in a blender with the yoghurt and whiz until smooth. Taste and add a little more honey, if you like. Pour into 2 glasses and drink straight away.

It’s carrots, enough said. And if it wasn’t, it has orange. And cumin. The perfect side dish for your roast…

Preheat the oven to 175oC

Remove from the oven, take off the foil, and give everything a good stir. Then return to the oven, uncovered, for about 20 to 30 minutes, so the carrots start to caramelise.

When you take the dish from the oven, stir in the orange zest and a good squeeze or two of the juice. Serve at once 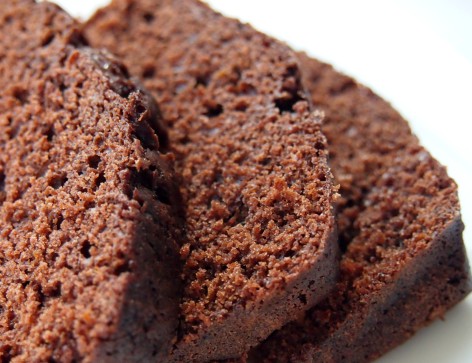 Nothing like a happy chocolate-y orange-y and super rich-y cake moment to cheer up the day. Never mind the calories – they are all worthwhile.

Line the loaf pan with parchment paper and grease the sides.

Beat the already soft butter with the syrup and the sugar until you have a fairly smooth cream (you probably will still feel a bit of grit; should look like a large weak coffee with milk).

Carry on beating in the remaining dry ingredients and then add, still beating, the orange zest and finally, gradually, the orange juice. At this stage, the batter may suddenly look dimpled, as if slightly curdled – if this happens, do not worry.

Pour and scrape the batter into the load pan and put in the stove for 45 minute. Test with a knife before taking it out.  A cake tester won’t come out entirely clean, as the point of this cake, light though it may be, is to have just a hint of inner stickiness. Let cool a little in its pan on a wire rack, then turn out with care and leave on the rack to cool.

In one word: yum. And I am not even such a big fan of salmon… It was probably one of the most cooked dishes of this year, together with the fennel orange salad. It was quite hard to explain that indeed this is supposed to be diet food and that indeed there was no added fat in this dish

Baked salmon with an orange chilli ginger sauce (adapted from Dave Myers and Si King’s The Hairy Dieters: How to Love Food and Lose Weight)

In a bowl large enough to hold both slices of salmon, mix the sliced ginger and garlic with the ginger syrup, the orange juice and the soy sauce. Add in the orange zest and the freshly ground the black pepper. In case you cannot source the ginger in syrup, fresh ginger can nicely replace it. In this case, add a couple of tablespoons of unrefined sugar.

Put the salmon in the bowl with the marinade. Turn a couple of times, ending with the fish skin side up. Cover and let it sit in the fridge for about 30 minutes.

Preheat the oven to 220oC. Line a small baking tray with baking parchment. Take the salmon fillets out of the marinade, scraping off any bits and pieces, and place them on the tray, skin side down. Season with more ground black pepper. Bake for 12 – 15 minutes, depending on the thickness of the salmon.

Meanwhile prepare the sauce. Pour the marinade into a tiny non-stick pan and bring to the boil. Cook for 6 minutes or until the liquid has reduced to half and the garlic is softened.

Every now and again, I find a dish that I like so much I do it over and over and over again. Like, for example, the Russian egg salad. Or, this cauliflower soup. And, let’s not even mention the whole #beetrootgate affair. This is one of those dishes, which has become one of the staples of last Winter (and Spring…  and even Summer). It is just divine with smoked trout, baked salmon, cold cuts… And all this for less than 250 calories for a reasonable sized portion. Really, what not to like this salad?

Fennel orange salad with harissa dressing  (adapted from Dave Myers and Si King’s The Hairy Dieters: How to Love Food and Lose Weight)

For the harissa dressing

Place the sliced fennel in a salad bowl. Carefully remove the white bitter parts of the orange and slice the oranges to divide flesh sections. Add to the bowl Crush the roasted salted almonds with a mortar and tip in the bowl. Add the sliced radicchio In a small bowl whisk well the harissa, honey, coriander and white wine vinegar. Pour in the olive oil in a very thin stream (spoon by spoon),  beating all the while. The sauce is ready when it you obtain a glossy, slightly thick mixture. Drizzle the harissa dressing over the salad and gently toss to combine. Serve immediately.

I know I am partial to all things carroty… I had to try this one,  mobile calorie intake units or no  mobile calorie intake units to entertain. While it might be a departure from the original carrot hummus recipe (no chickpeas in sight), it was certainly delicious. The kind of food I need to hide from myself to make sure I don’t eat it all in one go. Sweet and spicy, aromatic and smooth, shiny and happy…

Put the carrots, garlic and oil in a roasting tin, season and roast for 30-35 minutes, giving the carrots a good stir halfway through, until tender and starting to caramelise at the edges. Remove from the oven and leave to cool slightly.

Tip the carrots into a food processor. Squeeze the garlic cloves out of their skins and put these in, too, along with any oil from the tin. Add the orange zest and juice, lemon juice, tahini and some salt and pepper, and process to a coarse purée. Add more lemon juice and seasoning as necessary. Serve the hummus warm or at room temperature.

Orange and date salad with orange flower and cinnamon syrup

… and this was what we had for dessert. Recipe is here, but without the spices it won’t work.

At some point over Christmas, I just felt the need to have something sweet but at the same time fresh and light.  Meaning, a dessert that didn’t involve deep fried dough or extra sugary milk and eggs concoctions, all covered with even more sugar and a generous amount of  cinnamon. While it was not sugar or cinnamon free, these fragrant orange slice were very nice break from all those Christmas excesses. And, for extra bonus, they provided the recommended daily dose of Vitamin C. Overall, it is super easy dish to do, and is ideal to finish a decadent rich meal. Original recipe was found in Gordon Ramsay’s Fast Food.

Slice off the top and bottom of each orange and place upright on a chopping board. Following the curve of the fruit, cut off the skin, making sure that you remove the withe pith as well. Turn the peeled orange on one side and cut into slices, removing any pips as you do so.

It is just one these salads perfect for Summer. I keep doing it over and over again, and no one seems to be tired of it. Although I am pretty sure this is a Gordon Ramsay dish, I forgot where I found it. But, in any case, if you want to be very precise, this actually is a variation of Gordon’s original recipe, which called for rucola. Mr Caramelised isn’t so fussed about it, so to keep domestic harmony I promptly replaced it with fresh spinach leaves. In all honesty, I didn’t have much problems to let the rucola go…

Spread the spinach in a large flat plate. In top of it sprinkle the orange and the trout. Season with olive oil balsamic vinegar, salt and pepper.

I cannot make rice pudding the way my Mother does. No matter how many times I have watched her doing it or how scrupulously I follow her instructions, it is not the same thing. It doesn’t taste the same, it doesn’t feel the same and it doesn’t do her recipe any justice. It seems just impossible to reproduce her pudding rice. For a while, I tried other recipes, like the one Spanish chef Juan Maria Arzak has in one of his books, to less than optimal results.

A few days ago, while watching season 2 of Masterchef Australia, I saw how Gary Mehigan  and George Calombaris did this rice pudding during one of their masterclasses. It looked delicious, packed with different flavors and textures, and they comprehensively explained how to cook it. And, I decided it to give a another go to rice pudding. Anyway, what sort of expectations would you have on an Australian rice pudding recipe?  It was worthwhile the effort. In fact, there was a respectful silence around the table while people eat their desserts… Do not feel tempted to remove the tarragon, on the pretenses that no rice pudding has green stuff on it. With the orange, it is a delicious combination.

Step 1: For the candied orange peel, place 1 cup of the sugar and 1 cup of water in a small saucepan over low heat, stirring until the sugar has dissolved. Increase the heat to medium, add orange peel and simmer gently for 45 minutes until syrupy. If you are not using it immediately, it is better to separate the peels and letter then cool).

Step 2: For the orange jelly, line a 500ml plastic container with cling film. Add ¼ cup water, orange juice and sugar to a small saucepan and bring to the boil. Sprinkle in agar agar and whisk for about 5 minutes until dissolved. Remove from the heat. Pour the mixture through a fine sieve into the lined container. Refrigerate for about 25 minutes or until set. Invert jelly from container onto a board and cut into 1cm cubes.

Step 3: For the rice pudding, add the milk, rice, vanilla bean and seeds to a non-stick saucepan. Bring to the boil and simmer uncovered for 30-35 minutes, or until creamy and the rice is tender, stirring regularly. Add the remaining sugar and stir for about 2 minutes until dissolved (I had to use the whole 1-L of milk, as the rice absorbed the first 700mL of milk).

Step 4: To serve, divide rice pudding between serving bowls. Arrange the jelly jewels on top, along with the orange segments, tarragon leaves, candied orange peel, a spoonful of syrup and some puffed rice. Serve immediately.