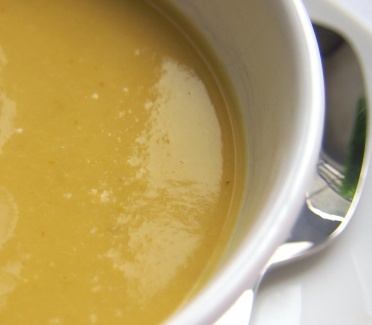 By accident, I found out a close enough version of the zucchini soup I used to ate at the university’s research centre canteen. Many years and canteens after, I now realise how much love and care was put into it. It was probably the most homely food away from home I ever had…

Zucchini Garlic Soup (adapted from a recipe found in The Kitchn)

Melt the butter in a heavy pot over medium heat. When it foams, add the onions and cook on a medium-low heat for about 10 minutes,  until the onion is soft and translucent. Add the crushed garlic and ginger. Fry for a couple of minutes more, making sure the garlic doesn’t brown.

When the onions and garlic are done, add the zucchini and cook until soft. Add the broth and bring to a simmer. Simmer at a low heat for about 45 minutes.Taste and season with freshly ground salt and pepper. 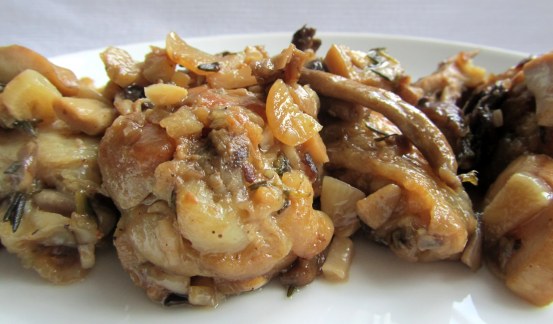 It seemed like a good idea to cook this dish for the 10th anniversary of my doctoral exam. It is almost finger food, it is somehow Spanish and its recipe seemed straightforward enough. For an extra touch of nerdiness, I could even use the same species of mushrooms I used for my PhD (Pleurotus eryingii, if you really must know).

Then, I realized the recipe called for 30 (thirty) garlic cloves for 6 persons. Cook for twelve, and you’ll end up with 60 (sixty) of them to peel and slice. I.e. at an average of 10 cloves per head, 6 garlic bulbs. Or, if you want to be very precise, at an average of 90g per bulb, about 540g of garlic to slice. In total, it was a 1h long operation that left me with tears in the eyes, redness in the fingers and the taste of garlic in the back of my throat. Needless is to say that after that I just had to had a shower before I find myself ready to face the company of civilized people. It took a good couple of weeks until I felt the need of using garlic, either in major or minor proportions.

At some point, I was getting concerned this dish would actually work. For more drama, after having seen a big bowl of garlic being poured into the concoction, my suffering testers dinner guests were showing an increasing preoccupation about its palatability. It was a wasted worry. It was indeed a delicious dish.  A bit garlicky, but far to be the garlic overdose some catastrophists had anticipated. The white wine just cuts the grease, the thyme added some freshness to it, the chicken wings get soft and tender… Perfection on a small dish cooked with humble ingredients.

1. Season the half chicken wings with salt and pepper.

2. Heat the olive oil in a large pan until it is hot and add the chicken wings. Cook them gently for about 30min, turning regularly.

3. When the chicken wings are evenly browned, drop in the garlic and cook for 5 more minutes.

4. Add the bay leaves and the thyme and mix.

5. Poor in the white wine, and turn up the heat and let it simmer until the wine has reduced a little.

6. Add the mushrooms and cook for 2 minutes until they are well incorporated with the meat, garlic and herbs.

7. Poor in the water and let it simmer until it has evaporated and the mushrooms are soft. 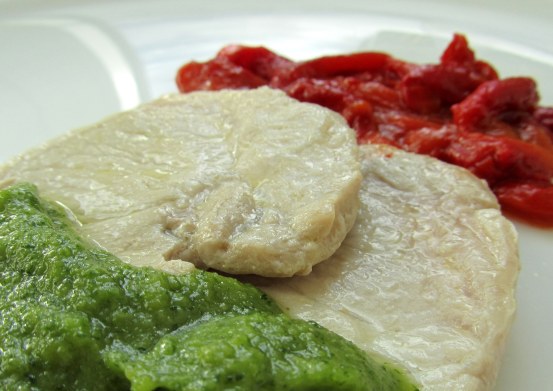 Of course I had to get Ferran Adrià‘s The Family Meal. How could I not, specially if Ferran Adrià promises dishes any cook can do, at an affordable price of  €5  per person?  And, this is the first dish I did. While I am very proud I could pull an Adrià dish all by myself, I also have to say it was not horribly complicated. It could even be a weekday meal…. The dish itself s great – the sweetness of the red pepper combines to perfection with the pork. The parsley and garlic olive oil is fresh and has a delicate flavour. All in all,  a delicious no-too-much-fuss.

Preheat the oven to 200°C/400°F/Gas mark 6. Rinse the peppers, and then place in a roasting tin while still slightly wet.

Drizzle with a little olive oil and roast for 45min

Fill a small saucepan with water then add the garlic. Bring the pan to boil.

Lift the garlic out of the water and into a bowl of iced water to quickly cool. Repeat this twice, starting with cold water  in the saucepan each time

After 45min, the peppers will be blackened and soft. Leave until cool enough to handle. Keep any juices that have collected in the pan.

Peel the skin from the peppers and remove the seeds. Do this over a bowl to catch any juices.

Cut the pepper flesh into thin strips. Put the peppers and the reserved juices into a pan and simmer over a low heat for 5min.

Put the drained, blached garlic, parsley leaves and remaining oil into a tall jug or beaker. Process with a hand held blender until finely chopped.

Place a large frying pan over a high heat and add a little olive oil. Fry the pork for 1 1/2 min until golden on both sides and juicy in the middle.

Season the pork with salt and pepper, and serve with the peppers. Finish with a tablespoon of garlic and parsley oil. 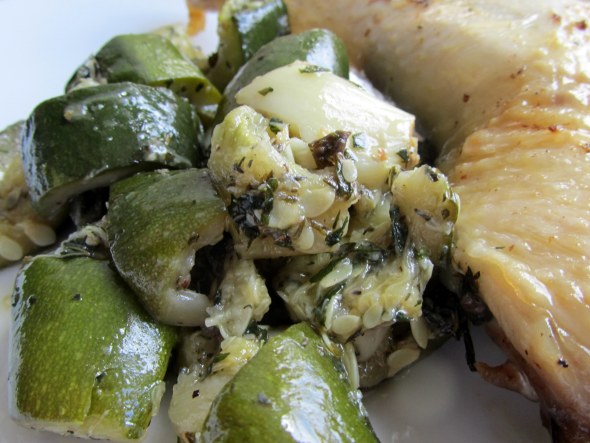 In a couple of weeks, courgettes’s season will be almost over.  But, for the time being, we still can find them at the supermarket screaming to be cooked with loads flavors to soak up. For example –  garlic, thyme and mint, as in this crushed courgettes dish Yotam Ottolenghi created for The New Vegetarian.

To go with the courgettes, nothing better than a roasted chicken. For this one, I used a very basic recipe I saw on Masterchef Australia (with a couple of tweaks).

Heat the oven to 200C/400F/gas mark 6. Put the courgettes and garlic cloves in a bowl and add the dried mint, thyme, salt, some black pepper and the oil. Mix everything together and transfer to a medium baking dish – make sure the courgette pieces overlap a little, cut side up, and form a single layer. Bake for about 40 minutes, until the courgettes have softened and taken on some colour.

Transfer everything to a colander, pressing the courgettes so they start to release some of their liquid, and leave to cool for at least 30 minutes.

Transfer the contents of the colander to a mixing bowl, and squeeze the garlic cloves out of their skins (discard the skins). Mash everything together with a fork (if the courgettes’ skin is on the tough side, you may have to chop them with a knife). Stir in the remaining ingredients and set aside for an hour before serving.

Preheat the oven at 220oC

Cover the  bottom of a roasting tray with olive oil.  Put the chicken into the tray skin, with the side up in one evenly spread layer.

Pat the chicken skin with a paper towel until it is dry.  Sprinkle evenly with salt and pepper  and drizzle with olive oil. Put the rosemary on top of the chicken pieces.

Put the tray into the oven, and  cook the chicken for about 35min.