It is cold in Zurich, and this is all I want to eat. It is warming, filling and packed with different flavours – what is not to like about this soup?

Add sweet potato and carrot. let them sweat stirring often, for 5 minutes until they are all covered with the spices and onion.

Add stock. Cover and bring to the boil. Reduce heat to medium-low and simmer, stirring occasionally, for 20 minutes.

Add chickpeas to soup and simmer, covered, for 10 minutes or until chickpeas are tender.

Remove from the heat and blend the soup with an hand held mixer, until smooth.

Return to saucepan over medium-low heat. Season with salt and pepper. Stir in 1 tablespoon lemon juice. Heat, stirring until it gets to a soft boil. Serve.

Brown lentils and rice with cinnamon and cumin 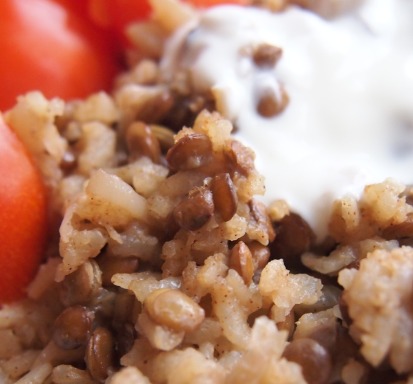 Just to keep up with recently acquired superstitions, the first post of the year is a lentil dish. It may sound a bit too healthy, too sensible and maybe even bland, but it is far from it. The few spices it has, make it fragrant, flavourful and delicious… For bonus points, it has something bright red on it, for an extra bit of good luck.

Heat the oil in a large saucepan until it is pipping hot. Drop in the sliced onions and add salt and pepper. Cook for about 10min, until soft and golden. Add the garlic, the cinnamon and cumin. Cook for another 2min until fragrant.

Add the lentils and the rice. Mix until they are covered with the spices and the onion. Poor in the stock and bring to a boil. Reduce the heat. Let it simmer for about 30min until the water is absorbed and the lentils are soft. Season to taste with salt and ground black pepper.

Serve with the quartered tomatoes and a dollop of yoghurt. 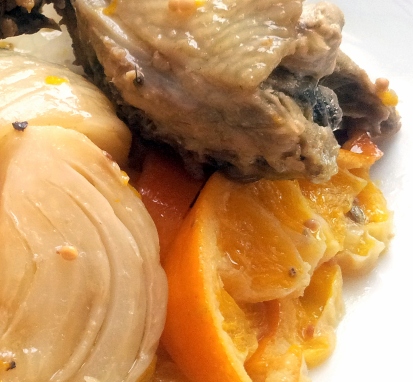 A not so good picture for a great dish.

In a dish combine the first 6 ingredients and mix well. Add the chicken, fennel, mandarins and thyme and let marinate for a few hours. If you’re not super organised (which I wasn’t) you can skip the marinating and just jump straight into the cooking.

Preheat the oven to 220ºC. Transfer the chicken, fennel and all its marinade into an oven proof roasting tray large enough for everything to sit in a single layer. Making sure the chicken is skin side up. Place the tray in the oven and roast for 35-45 minutes, or until the chicken is cooked, and its skin is crispy and golden.

Roasted sweet potatoes and fresh figs in a reduction of balsamic

Apparently, it is one of the most popular Yotam Ottolenghi’s recipes – and rightly so…. A few tweaks to the recipe, though. Onions were replaced by leeks as one of the  guests is allergic to it. Fresh figs were replaced my dried ones, due to sourcing and budgetary constraints. Probably not the dish Yotam envisioned, but still… it is a pretty good way to start your Autumn.

Wash the sweet potatoes, halve them lengthways and then cut each again similarly into three long wedges. Mix with three tablespoons of the olive oil, two teaspoons of salt and some black pepper. Spread the wedges out on a baking sheet, skin-side down, and cook for about 25 minutes until soft but not mushy. Remove from the oven and leave to cool down.

To make a balsamic reduction, place the balsamic vinegar and sugar in a small saucepan. Bring to a boil then reduce the heat and simmer for 2–4 minutes, or until it thickens. Be sure to remove the pan from the heat when the vinegar is still runnier than honey; it will continue to thicken as it cools.

Stir in a drop of water before serving if it does become too thick to drizzle. Arrange the sweet potatoes on a serving platter.

Heat the remaining oil in a medium saucepan and add the spring onions and chilli. Fry on a medium heat for 4–5 minutes, stirring often, making sure not to burn the chilli, and then spoon the oil, onions and chilli over the sweet potatoes.

Dot the figs among the wedges and then drizzle over the balsamic reduction. Serve at room temperature.

Every now and again, I find a dish that I like so much I do it over and over and over again. Like, for example, the Russian egg salad. Or, this cauliflower soup. And, let’s not even mention the whole #beetrootgate affair. This is one of those dishes, which has become one of the staples of last Winter (and Spring…  and even Summer). It is just divine with smoked trout, baked salmon, cold cuts… And all this for less than 250 calories for a reasonable sized portion. Really, what not to like this salad?

Fennel orange salad with harissa dressing  (adapted from Dave Myers and Si King’s The Hairy Dieters: How to Love Food and Lose Weight)

For the harissa dressing

Place the sliced fennel in a salad bowl. Carefully remove the white bitter parts of the orange and slice the oranges to divide flesh sections. Add to the bowl Crush the roasted salted almonds with a mortar and tip in the bowl. Add the sliced radicchio In a small bowl whisk well the harissa, honey, coriander and white wine vinegar. Pour in the olive oil in a very thin stream (spoon by spoon),  beating all the while. The sauce is ready when it you obtain a glossy, slightly thick mixture. Drizzle the harissa dressing over the salad and gently toss to combine. Serve immediately.

The lamb tajine cook off: The Hairy Dieter’s take

After The Spicery and The Laughing Lemmon, now is the turn of the Hairy Dieters. Again, the same basic ingredients:  lamb, spices and fruits. But, it also had chickpeas and tinned tomatoes.  And it was sweet. Very sweet… probably one spoon of honey  too much for my taste buds.  All in all, it was delicious and filling. In fact, a lot more heavy than the other version even though it had much less fat. Don’t take me wrong – it was delicious. It is the comparison with the Laughing Lemnon’s which it makes it sound like a bit pedestrian.

Lamb tajine (adapted from Dave Myers and Si King’s The Hairy Dieters: How to Love Food and Lose Weight)

Trim the lamb of any hard fat and cut into rough 3cm chunks, season all over with salt and pepper.

Mix the cumin, coriander, cinnamon and chilli in a bowl.

Heat oil in the tajine until is piping hot. Add the lamb, onions and garlic and stir fry over a high heat for 1 minute until lightly coloured.

Sprinkle with the spices and cook for 1-2 mins more, tossing constantly until you have a fragrant aroma. Tip the tomatoes into the casserole dish, together with the cold water,  honey  and chickpeas. Add the stock cube over the top and stir well.

Bring to a simmer, stirring couple of times. Cover with the lid and let cook with low heat for 60min. Open the lid and drop in the dried fruits and still well. Put back the lid and let it cook for another hour, or until the lamb is tender. 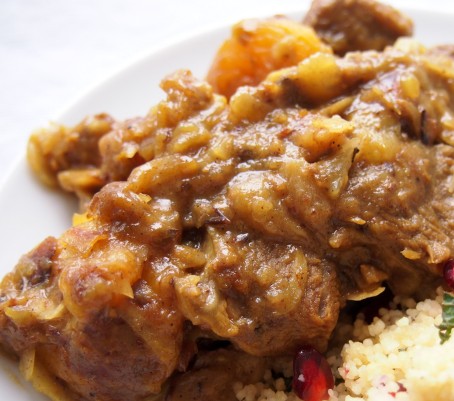 You may remember from a few posts ago a mention to Laughing Lemon’s Moroccan Feast, a tajine and The Spicery’s lamb with apricots and almonds. It was not my intention by then to start a cook off, but as I tried different recipes comparisons become inevitable.

This one is the Laughing Lemon’s take on it, probably as close as it can get from his Mother’s recipe. The ingredients are almost the same ones that The Spicery’s: lamb, honey, almonds, apricots, prunes. However, there are no tomatoes on this dish.  As it turned out, it was a such sweeter and its flavours, more delicate and balanced. Probably, this take has much less spin to the original dish.

PS  Please don’t say Jack I made the couscous following the instructions on the pack (plus pomegranate, mint and lemon juice). 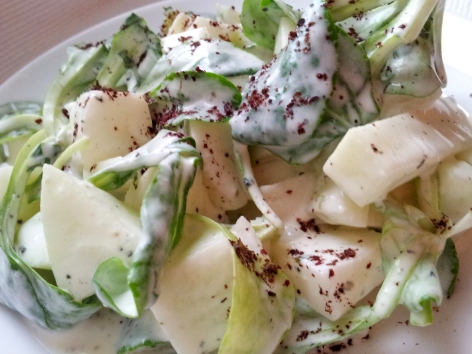 To my great dismay, I realized too late I have no Irish specialty to post on St Patrick’s day… After pondering for a few seconds, I decided to go for something green instead. All I had on the store was this Middle Eastern dish, found in Yotam Ottolenghi and Sami Tamimi‘s Jerusalem.  A very unlikely combination, but nevertheless green enough. Happy St Patrick’s day!

Peel the kohlrabis, cut into 1.5cm dice and put in a large mixing bowl. Set aside and start making the dressing.

Add the dressing to the kohlrabi, followed by the fresh and dried mint, and halt nüssli, Gently stir and place on a serving bowl.

Drop what is left of the nüssli and sprinkle with sumac. 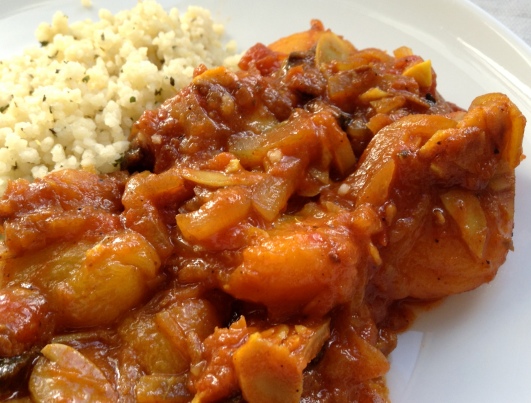 What started with a Laughing Lemon’s cooking lesson ended up with K. and B. giving me a tajine, which eventually became very handy to try the January kit of The Spicery: a lovely lamb tajine with apricots and almonds.  The Spicery  – do not confuse with spice rack – is the word for the place where spices are made or stored. It is also an online shop which sells freshly ground and blended spices – really top-notch stuff. Or, puts together kits and sends them together with their recipes.  I have to say I was bit skeptical when I heard about his. After 5 munches into this lamb tajine, I had to agree this was one of the best ones have ever had. If you want to try, the recipe is here. To make it work, you will really need the spices…

Cooking classes with the Laughing Lemon: fennel and carrot salad

You may have noticed a lot of Middle Eastern flavors in this blog as of late. Jerusalem – the latest Yotam Ottolenghi‘s book – is partly to be blamed, but… this was how everything really started: The Laughinglemon‘s Moroccan Feast. I knew I would like it when I saw it, and registered without further ado. What I was not expecting was Jack’s pulling his mother’s old family recipes and throw at us a  family meal cooked from the heart with all love and care. The kind of thing I will cherish for a very long time. * grab kleenex to wipe a stubborn tear *

As most mothers, Jack’s mother didn’t write her recipes down – why bother if they are normally passed down from generation to generation? And, when she explained the dishes to her sons, she did it as every mother would do. An essential ingredient was forgotten, directions would range from “let a cook for little while, but be careful not to overcook” to a whole time mother classic “add a little bit just like that” or failing to mention the little detail which would have avoided to set the kitchen on fire. Jack and his brother are trying to recover the recipes slowly but surely. and this Moroccan feast is the result of it. The most curious of all was the sudden realization that Jack and I might actually be related. Both our families are of Jewish extraction. Mine became Roman Catholic to escape the Spanish Inquisition. His, most likely fled to Morocco around the same time…

Religion and familiar disputes apart, this spicy carrot and fennel salad was one of the heroes of the day. It is not so straightforward as it might seem and it has a long list of spices, herbs and condiments. The result is totally worthwhile the effort – a fresh and crunchy dish with bold flavors. The type of thing which made K.  lose her normal calm-cool-collected state to fight for the last bit (She won. I still have a black eye…).