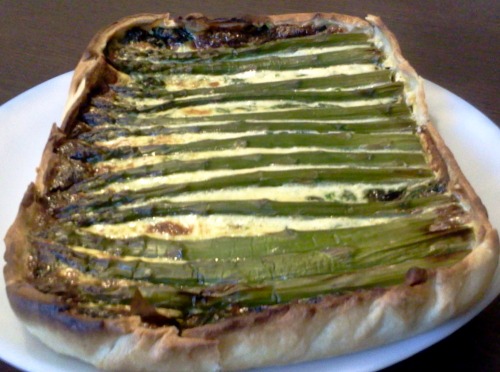 I found this dish by accident in Leite’s Culinaria. And it was just what I was looking for: asparagus are in season, a party was on the planning and if not edible, at least it was decorative. Truth to be said,it was a pretty good idea. It even passed the 11 year old test (minus asparagus).

2. Bring a pot of water to a boil. Have a bowl of ice water ready. Plunge the spears into the water for just a moment to blanch it, then remove it and toss it into the ice water. Do the same with the spinach, if using.

3. Meanwhile, brush a 23cm square tart pan or a 36cm rectangular tart pan with a little melted butter and line it with a sheet of phyllo pastry, pressing the phyllo against the side of the pan and allowing the excess to hang over the edge of the pan. Brush the top of this sheet with more butter and top it with another sheet of phyllo. Repeat until all the phyllo is used. Trim the edges of the phyllo flush with the top of the tart pan. (Phyllo can me a nightmare to work with, and I was in a hurry. Just got some regular puff pastry from the supermarket, buttered the tart tray and put the sheet in).

4. Drain the asparagus and the spinach, if using, and pat them completely dry.

If using spinach: Arrange a layer of spinach on the phyllo. Sprinkle lightly with salt and pepper. Add the Gruyere, a second layer of spinach, and season again. Beat the eggs, cream, and nutmeg in a bowl, then pour the mixture over the tart. Arrange the spears in a row on the tart. Brush the exposed pastry edges with a little butter. Cut a piece of parchment or foil that covers the inside of the asparagus tart but leaves the phyllo edge uncovered.

If not using spinach: Sprinkle the Gruyere over the phyllo. Beat the eggs, cream, and nutmeg in a pitcher or bowl, then pour the mixture over the tart. Arrange the spears in a row on the tart. Sprinkle lightly with salt and pepper. Brush the exposed pastry edges with a little butter. Cut a piece of parchment or foil that covers the inside of the asparagus tart but leaves the phyllo edge uncovered.

6. Bake the asparagus tart, uncovered, for 15 minutes. Cover the center but not the edge of the pastry with the parchment or foil and continue to bake until the center of the tart is just set, 15 to 20 minutes more. Let the asparagus tart rest a few minutes before slicing. (I was not very precise with the paper foil, and the edges got slightly burn).