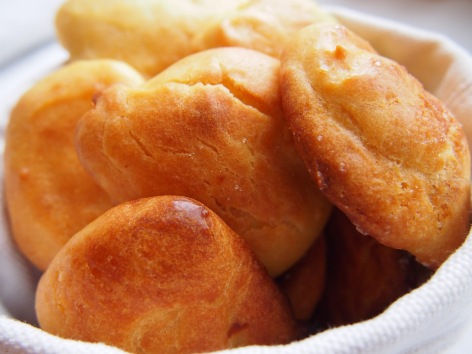 Truth to be told, this is far cry from the true chouquettes you can buy in Paris. The multicolour beads of sugar are missing, to start with, they are too big, they were not as airy as they should have been. But, also truth to be said, while these chouquetes are a travesty of the real ones, they were still delicious. They came out as small slightly sweet breads, ideal to eat with a little butter and ham or cheese. No complaints heard from the mobile calorie intake units, at least…

Chouquetes (adapted from Elizabeth Bard‘s  Lunch in Paris: A Love Story with Recipes )

In a large saucepan with a heavy bottom, combine the water, butter, sugar and salt on a low temperate. Once the it is well mixed, bring to a gently boil and remove immediately from the heat. Add the flour spoon by spoon dstir vigorously with a wooden spoon until a tight dough forms and pulls away from the side of the pan. It should feel like a tight dough, with a texture similar to marzipan.

Using two teaspoons, make small mounds of dough, leaving enough space between them (you can also use a piping bag with a plain tip). Sprinkle with the granulated sugar or the coloured beads.

Put the trays  in the stove one at a time and let cook for about 12min at 220oC. Then lower the heat to 200oC and let the chouquettes bake with a the over door slightly open (using a wooden spoon to hold the door will do).