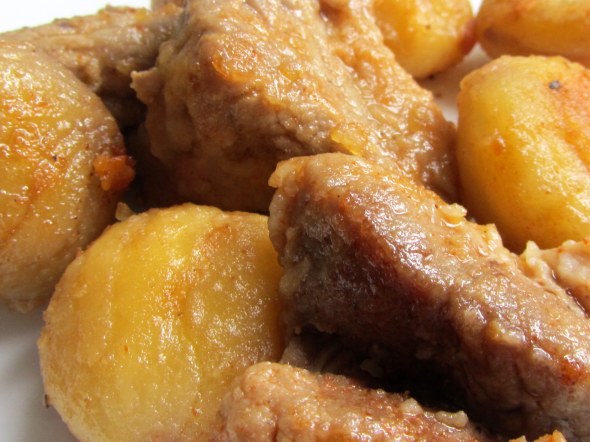 To keep up with the Autumn spirit, an old Portuguese classic. The sort of dish that reminds of home, rich, tasty  hearty. Just what you need for a cold grey day.

The recipe is by Chefe Silva, from his book Recipes for My Friends. The paprika is a replacement of colarau, a condiment used in Portuguese cuisine made with the different types of Capsicum. They are more or less the same, but colorau tends to have a stronger saltier taste and give a radioactive red color to the food.

Cut the meat into small pieces weighing app. 15g and season them with white wine, salt, pepper, paprika and the garlic. Let it marinate for about 1 hour. Then drain the meat, squeezing it very well. Save the marinade. Heat up the lard in heavy bottom frying pan, add the meat and let it fry at strong heat, stirring well. When brown add the chestnuts and let it fry for another 3 to 5 min. Then add the marinade you saved, and let reduce for about 2 min. Serve the dish with oranges or with apple jam.

Around 1975, long before celebrity chef storm over the global media outlets, the Portuguese Chef Silva had a very popular TV show called Tele Culinária [Tele Culinary]. Every week, all the country stopped in front of the tele to watch Chef Silva doing his creations, normally with loads of cream, double cream and different types of fat. It was such a popular TV show that it soon became a weekly magazine, with a special section for the televised recipe (apparently, first number went out on October 4th, 1976). My Mother never forgot to buy it and consistently gave a go to some of the recipes. Some of them became part of the family tradition – like the pumpkin cakes she always does on Christmas.

The roasted pork loin with orange was taken from Recipes for My Friends, a recently edited book. On the forefront, Chef Silva explains that these are the things he cooks whenever he entertains as “life tastes sweeter when friends and family join you at the table”. By the look of it, you can almost feel Chef Silva dictating from memory or looking for scribbled papers tucked away into the kitchen drawer.

Chef Silva recommends to serve the roasted pork with orange quarters. But, I thought that would be too many citruses in the same plate, and decided to go for apple jam instead. This is my Mother’s recipe, passed along in a moment of despair during a trip to the supermarket. “Why spend all that money in a sugary artificial paste, when it takes less than 20 minutes to to it home…. go and fetch some apples! You kids cannot value money and properly made food”. She was, as most of times, right.

Poor the wine over the meat and season it with salt and pepper. Place on the tray greased with the lard and roast it on a oven set for 160oC for about 35min. Turn the meat occasionally.

In the meanwhile, prepare the sauce: heat up the sugar in a small pan and stir it with a wooden spoon until it browns (brown, not burnt, I may add. It is really important to stir it at all times). Add 2dl of orange juice, 2 cloves and thin orange peels cut into diamond like shapes (slowly, otherwise the sugar will crystallize; if it does, just keep stirring until it dissolves). When serving, stick the diamonds to the meat using cloves.