Cooking class with the Laughing Lemon – the pesto battle 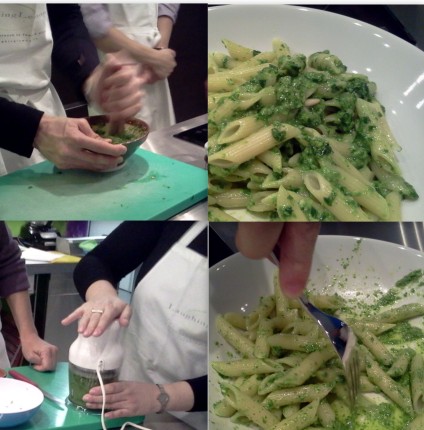 So, for over 40 years, I consistently refused all cooking classes my Mother ever offered. I am even (semi) proudly self taught. My poor suffering testers guests are all alive and still show up for dinner every now and again. What would make me, food-blogger wannabe, take cooking classes all of a sudden? Have I gone softie, in my old age?

Well, not really… The analytical and brainy answer would be something along the lines of filling the gaps in my culinary knowledge. Which is fancy to say  I have no clue about Italian cuisine, including pasta and its sauces, pizzas and risottos… It is not the kind of thing Portuguese and Spanish tend to cook , and, lets face it, not its secrets are exactly passed along generation to generation. It can try, but clearly, it is not my forté…

The right brain answer was – of course – because I wanted to. I had heard so much about the Laughing Lemon and learnt so much with his blog and posts on the Englishforum.ch, that it seemed even disgraceful to have missed his classes for years.

It was probably one of the best things I did to fill my culinary knowledge gaps. And, it was not only educational – it was also great fun. With infinite patience,  Jack showed us different methods for making a pasta sauce, and explained which pasta types are appropriate for each sauce style. To make it even better, we even had time for a demonstration of old vs new cuisine techniques (and eat them). I can promise you the Internets if filled with pages and fora discussing this particular issue – should a pesto be made with a mortar or a blender? Which one of the methods gives a better pesto? Does it matter, really? The battle of pesto was served…

The crushed garlic, basil, pine nuts and salt were dropped  in a big mortar. Then each of the team members used the pestle to grind the ingredients down to a paste. After 20min of great effort, the cheese was folded in and  evenly mixed with the green paste (a lot more grounding, needless to be said). Finally, the olive oil was added little by little, mixing with a wooden spoon until well incorporated in the mix. At the end, Team Mortar had a green paste with some floaters and pellets.

Chit-chated for 28 min, and then suddenly realized Team Mortar was * almost * done. Quickly placed the ingredients in the blender, and buzzed it three times (app) until it was homogenized.  Then  checked for consistency and taste (a little more salt), buzzed a few more times, and a perfect smooth and green mixture was obtained.

Everyone tasted both pestos and voted as honestly as they possibly could. It was a close draw, but the smoothness and consistent taste stilted the scales in favor of the Blender Team.  It seems that normally, the Team Mortar wins, but not with this tough crowd.

For more information about the Laughing Lemon cooking classes can be found here.

Still bitterly cold in Zurich. The type of weather that calls for a hearty soup to keep you warm… Randomly found this recipe in Mafalda Pinto Leite’s Cozinha Para Quem Não Tem Tempo [Cooking for those who have no time]. The combination of flavors looked exactly what I was looking for and I even fancied chestnuts, for whatever obscure metabolical reasons. You cannot wrong with this recipe, but this gets hardly done in the 30min she claims it take.  The original recipe called for 150mL of cream to be added at the end. I found it a bit excessive and replaced the cream an equivalent quantity of chicken stock.

It was really good and soul warming. And, it is really worthwhile to make the rosemary… it just gives the soup a little punch, making it more interesting.

Ingredients for the soup

Ingredients for the rosemary pesto

Heat the olive oil in a big saucepan until it shimmers. Add the onion, celery, bacon and garlic. Cook for 10min or until the onion get soft and the mix start to color.

Add the chestnuts, the potato and the garlic. Add in salt and pepper to taste.

Bring it to boil, cover, and then let it simmer for about 25min, or until all ingredients are  soft.

In the meanwhile, start the pesto. Put the rosemary, garlic and pinenuts in a mixer. Blend and after, add the cheese and the salt. Add slowly the olive oil, mixing at the same time so you get a creamy mixture.

Finally, blend in the soup (if you want to add cream, this is your chance to do it).

Serve the chestnut cream sprinkled with the pesto.