Fennel with radishes and sumac 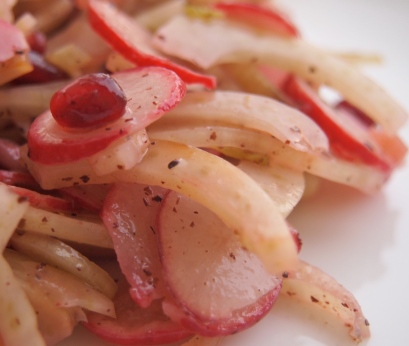 A memory of the Summer that has never been…  Very easy to do, bold flavours and can be prepared in advance. What’s not to like..?

1 Have ready a bowl of water with 1 tbsp of lemon juice in it. Finely slice the fennel using a mandoline and place in the acidulated water until just ready to serve, to prevent it discolouring.

2 Finely slice the radishes and place in a bowl. Whisk the oil and remaining lemon juice together. Drain the fennel and mix with the radishes. Drizzle over the dressing and toss gently. Strew the salad over a large serving platter and scatter with the pomegranate seeds, if using. Finish with a dusting of sumac and a little salt then serve straight away.

Orange and date salad with orange flower and cinnamon syrup 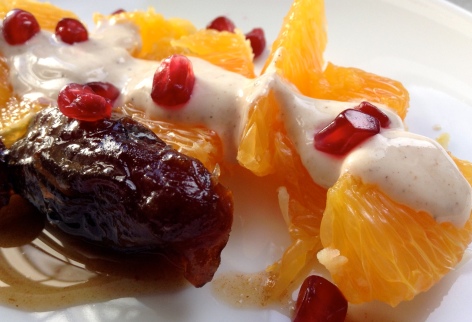 … and this was what we had for dessert. Recipe is here, but without the spices it won’t work. 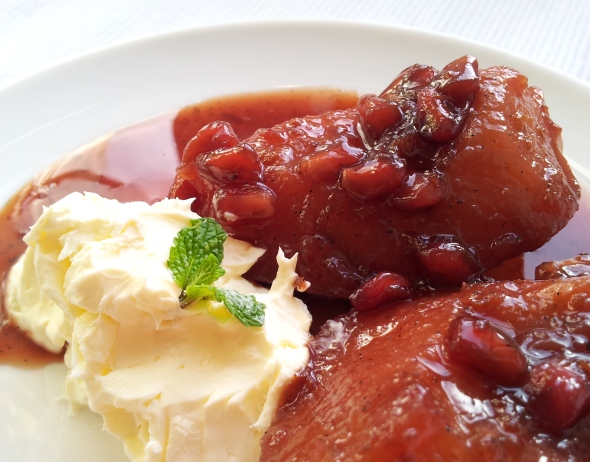 I can remember those cooking marathons my Mother used to endure around Christmas time, when all the cooking would be put to an halt to produce countless pots of marmelada. Do not confuse with marmalada... Marmelada is a very sugary quincy purée, which is a staple in every Portuguese kitchen. It seems to be something the Romans learnt from the Greeks, and which staid with us  until today,wikipedia dixit.

In any case, I would have thought to use the actual fruits for a dessert until I saw this recipe. And, I am glad I have tried it. Once you start with it, you just want to come back for more.

Core the eight quince quarters. Discard four cores and tie the others into a bundle with an old tea towel or muslin. Put the cored quince quarters into a heavy-based pan and add the wrapped-up cores, pomegranate juice, sugar, vanilla pod and seeds, orange peel and juice, and star anise. Bring to a boil, turn down to a gentle simmer, cover and cook for 15-25 minutes, until the quince is soft.

Remove the quince quarters with a slotted spoon and set aside. Simmer the sauce for 20 minutes or so, until it’s thick, syrupy and reduced to about 75ml. Just before serving, squeeze all the thick juices out of the core bundle into the sauce, then discard along with the orange peel, star anise and vanilla. Return the quince to the syrup and gently warm through. Place two quarters of quince on each plate, pour over some syrup and serve with clotted cream and a sprinkle of pomegranate seeds and shredded mint (if using)