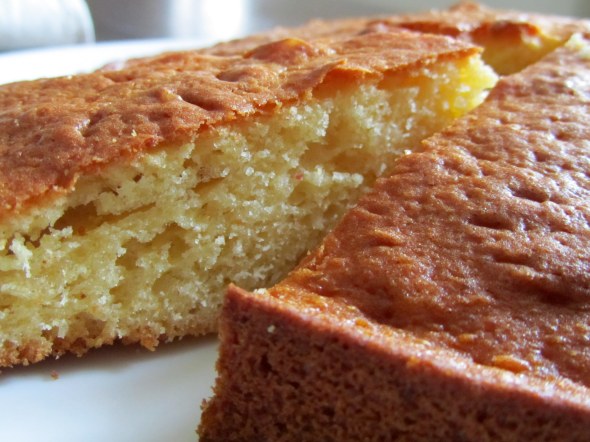 You have read it correctly – there are no typos in this sentence nor it is poorly constructed. While the vast majority of cakes have frosting on top or in the middle, the batter of this sponge cake was indeed made using a vanilla buttercream frosting. If there is an Annals of Improbable Culinary Research in this world, this dish would be worthwhile a cover. Or, at least a featured article. In fact, the vanilla buttercream frosting cake is so unlikely to be reproduced, that I will not even try to write down the recipe. If anything, because I cannot remember what ingredient was used when, or the proportions.

Even wannabe-food-bloggers have a less-inspired days in the kitchen. Sometimes, things just don’t go the way you expect – and as we say in Portugal,  o que torto nasce, tarde ou nunca se endireita  [what is born crooked, late or never gets straightened]. It looked like an semi-easy cake when I read  the recipe. But a few hours latter, with the cake still half done and a totaled kitchen, it seemed that I had made a colossal strategic mistake.

Everything went sort of OK, until I tried to whisk the egg whites to soft glossy peaks. I must have done this thousands of times and at this point in my life, I don’t even consider the possibility of failure. But, not today.  The white egg mix split, and there was nothing I could do about it. They were split and they remained split, no matter what grandmother tricks I used. I had no other solution but start all over again.

When I thought the worst was over and the cake was placidly sitting on the stove, I started on the frosting, using a Nigella recipe. Instead of a consistent white cream I was supposed to get, I ended up with a grey-greenish liquidy crème with lots of white floaters. I tried to sieve it, as recommended by most Mothers and professional chefs. After this delicate operation, the floaters were gone, but the grey-greenish liquidy could not be used to finish any serious cake. Again, had to start again, this time using the recipe of the original recipe.  It called for a lot of  butter and even more sugar, but .. it worked. I have to bitterly add, that Nigella’s recipe failed me not once, but twice.

At this point, I had my kitchen bench full of discarded elements: the gray-greenish liquid (basically, butter, sugar, vanilla and some flour), 3 yolks and something that resembled beaten white eggs.  Meaning, the elements you need for a cake. Following tje directions of a very basic recipe of sponge cake, I added the egg yolks one by one to the butter and sugar “cream”. Then I tossed in enough flour – and 1 teaspoon of baking powder –  to obtain a batter with a nice consistency. Finally, I folded in the egg whites. No need for a lot of TLC- it was actually quite the opposite of this.

Finally, I dropped into the stove, previously heated to 175oC (pretty much a standard of baking), and waited until a wooden stick came out dry from the center of the cake.

The result was a surprisingly light sponge cake, with a fresh almondy – vanilla taste. None of the testers was aware of the precarious conditions of this experiment, and fortunately they are all still alive. Some of them even asked for seconds (and got them). 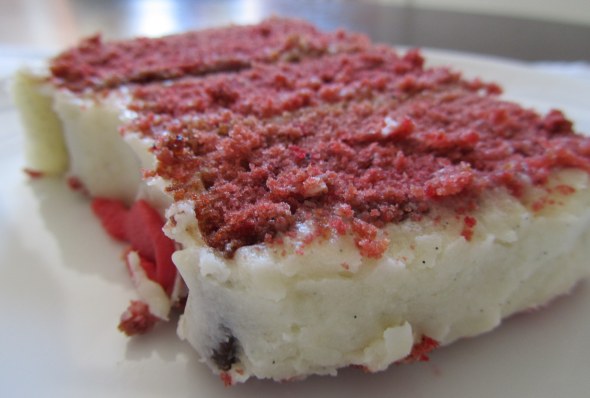 By a strange coincidence I started this blog a few days before my birthday. Actually, one of my first posts was about the ice cream cake my Mother used to do every year around my birthday .  This year, however, for some reason, I was not really in the mood for a creamy cold cake… I kept seeing red velvet cakes appearing on different TV shows and food magazines, much to the joy and delight of those who ate them. The New York Times described it as “a cake that can stop traffic”. If even the NY Times said it and Nigella had the recipe on her book and website, why not give it a go and try it for the dinner party?

As its own name says, the red velvet cake is red. Red in an unnatural shade of red. In case doubts that it should be red persist, it is layered with white frosting, to make the red go even redder. It is supposed to have a slight taste of cocoa and vanilla, and a velvety texture given by buttermilk. The red color is allegedly the result of the presence of anthocyanin in the cocoa, which becomes red in the presence of an acid, explaining the necessity of adding unusual ingredients in a cake like vinegar and buttermilk. Strictly speaking, the cocoa might turn to a reddish shade and become dark-red-brown…. To get the extra bright red, abundant food dye has to be added. No one knows for sure where the recipe comes from, whether it was created on the South of the United States or it was an experiment gone mad in a Canadian department store.  For sure, it seems to be a New World creation, as it is hardly ever seen on European cookbooks. In fact, I cannot remember ever seeing it for sale on this side of the Atlantic patisseries.

As this was a birthday cake, an elaborate decoration was expected. I had planned to do a flamenco style polka-dot pattern, being the number of red dots being equal to my age (approximately and vaguely equal- to avoid sticking candles on the cake, any excuse was worth trying). But… the butter cream was a bit more runny than it should have been, and though I had a perfect cylinder of marzipan to start with, cutting it in thin slices didn’t do any favors to its shape. It ended up as a Dali interpretation of a rustic Seville-olé red velvet cake (picture here). Per se, the name didn’t conceal the less-than-optimal decoration, but I earned  a lot points for imaginative and rhetoric culinary speech.

But, it all comes down to taste. And it tasted good. Very good, in fact: a very rich taste (not totally cocoa, but also not totally vanilla),  with a moist and sensuous texture. A pleasure as sinful and guilty as only cake can be.

Preheat oven to 180oC. Butter and line 3 9″ baking pans with parchment paper (I used 3 squared trays)Place melted butter and sugar in bowl and beat until light and fluffy (about 10 minutes). Add eggs one at a time, beating after each addition.

Make a paste of the food colouring, cocoa and salt (I never got a paste, as 20ml were not enough to bind with the cocoa). Add to butter mixture.Mix vanilla with buttermilk. Dissolve baking soda in vinegar, add to butter milk (it gets a bit fizzy – you might want to consider to use a larger bowl).

Make a paste with flour and a small amount of the milk. Add remaining milk gradually, mixing until smooth. Cook in a double boiler at medium heat until thick (do not forget to stir while cooking to avoid burning. If it gets to hot, remove it from the heat and stir to cool it a bid. It should be a very slow simmer. At the end, it will be a very thick mixture at end, but if you can see lumps it is pass it through a fine sieve). Let cool.